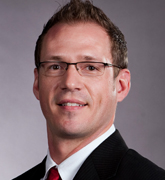 Ross Rosenow began his career with Jordy in 2005 as a Senior Project Manager and was promoted to Vice President in 2013.

Ross oversees Jordy’s talented team of employees as well all company operations, through involvement in projects or in a supervisory capacity of the project management team.

Ross comes from a construction family, where he learned the ropes working in the field and in the office of his father’s concrete construction company. Ross continued on as a Project Engineer for a general contractor in Seattle, where his main focus was hospital tenant improvements and buildouts. He relocated to Denver in 1999, taking a position as a Construction Project Manager with a major telecommunications company.

Ross graduated from the University of Wisconsin-Stout with a Bachelor of Science in Construction Management.